The day has finally come: InnovateABQ’s first brand-new building is open for all to see. 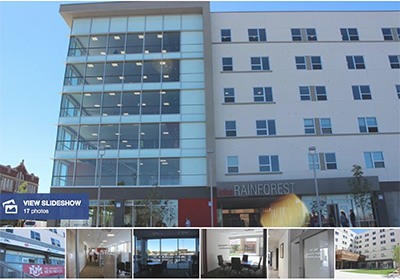 Slideshow – A look inside the completed Rainforest Building

The University of New Mexico Lobo Rainforest Building, fresh carpeting and all, made its official debut Friday morning. Dozens of attendants, including people from Albuquerque’s technology scene as well as city and state leaders, were present for the ribbon cutting.

The 159,000-square-foot, six-story building on Broadway Boulevard near Downtown broke ground in July of last year. Just over a year later, it is filled with student residents, local startups and more.

Innovate ABQ is a public-private partnership between UNM, the city of Albuquerque, Central New Mexico Community College, Bernalillo County and Nusenda Credit Union. Innovate is meant to house students, scientists and entrepreneurs in one spot.

Representatives with two firms working on InnovateABQ – David Green, a principal at Perkins+Will and Darin Sand, Goodman Realty Group’s vice president of development – have predicted the entire project could take from 10 to 20 years to complete. The higher end of the estimated price tag for the whole project could reach $150 million, as previously reported by Albuquerque Business First.

With conference rooms furnished and free food abound, Albuquerque Business First took a tour of the freshly minted Rainforest Building. View the accompanying slideshow to go inside the building on its opening day.

With its opening, Rainforest Building is leaving Business First’s Construction Watch map. See the construction projects on our interactive map that are expected to be completed this year. 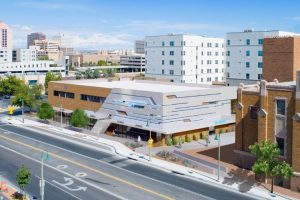